Home » About » Brief History of Wilmot

The Name of This Town

Originally a part of New London, the Town of Wilmot was not established until the early days of the American Republic. The town was carved out of the “gore”1 of Mount Kearsarge in 1807, long after most of our town names were issued. Wilmot took its name in honor of an Englishman ­– not from a member of the titled nobility as many other towns did – but from a scholar and clergyman. Dr. James Wilmot was a fellow of Trinity College, Oxford and rector of the church at Barton-on-Heath in Warwickshire, England. 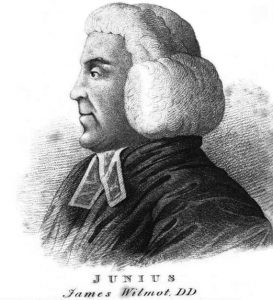 Dr. Wilmot never came to America, but he belonged to a group of London “radicals”2 in pre-Revolutionary days who protested vigorously against the treatment of the New England colonies by the English Crown. This group was led by William Pitt, Earl of Chatham, Edmund Burke, and the Marquess of Rockingham, a cousin of our Wentworth governors. They came into prominence through the circulation of the “Junius” letters, promoting freedom of the press and the rights of the colonies, in the late eighteenth century.

Dr. Wilmot was rumored to have been the author of these letters. He denied their authorship – although agreeing with their contents – and the author was later found to be Sir Philip Francis. Among the group was Herne Tooke, a friend of Voltaire, who promoted a fund to “pay the relatives of Americans murdered at Lexington and Concord by the King’s troops,” and William Bosville of Gunthwaite, who gave the famous “four o’clock dinners” to the group.

The naming of Wilmot in 1807, the year of Dr. Wilmot’s death, probably came about through the friendship of Eliphalet Gay, one of the first settlers of the town, with Bosville, with whom he had fought together in Canada. General Gay was a tavern-keeper at Wilmot, represented the town in the legislature, and served as its first selectman. He is commemorated in one of America’s rarest books, a copy of which is in the State Library. This is the poem by Ernest Vinton Brown, called “Eighteen Hundred and Froze to Death,” relating how, in the “coldest ever known” winter of 18163, when “the cellars were empty and the bins were bare,” General Gay refused to sell his corn and hay to speculators and gave it freely to his neighbors. General Gay commanded the 30th New Hampshire Regiment in the Revolution.

The above is excerpted from the 1970 book New Hampshire Town Names, and whence they came by Elmer Munson Hunt. Copyrighted by Polly Hunt Adams (his daughter). Published by Noone House, Peterborough, New Hampshire by William L. Bauhan, Pub. Elmer Munson Hunt came to Salisbury to retire from a lifetime career in journalism and was director of the N.H. Historical Society. He died in May 1968, age 85. He also wrote Family Names in N.H. Town Histories, published in 1946, and The Origin of N.H. Mountain Names in 1955. After 1955 he wrote a regular column for the Manchester Union Leader for a decade.

1 A gore is a tract of unincorporated land that usually arises from a survey error and is therefore often irregularly shaped and smaller than a town.

2 William Pitt (the Elder) was a member of a breakaway group of Whigs called the “Patriots.” The Patriots supported conciliation while the Grenvillites supported putting down the rebellion with force.

3 The “year without summer was caused by the eruption of Mount Tambora in April 1815 on the island of Sumbawa near Java in Indonesia. The explosive event injected such a large volume of fine dust into the atmosphere that it reduced the amount of solar radiation reaching the Earth’s surface and produced a transient global cooling.

To commemorate the 150th anniversary of the incorporation of the town, Casper LeVarn wrote and published The Early History of Wilmot in 1957. LeVarn described the formation of the town in a bit more detail than Hunt. In addition to the original fusion of the western portion of New London and the Kearsarge Gore, in 1832 Wilmot also annexed parts of the town of New Chester, which was then renamed Hill in 1837. (Gores generally arose through surveying errors made while town boundaries were being determined. As a result, they are often roughly triangular.) Portions of the New Chester annexation were later ceded to the adjacent town of Danbury in 1848 and 1878. 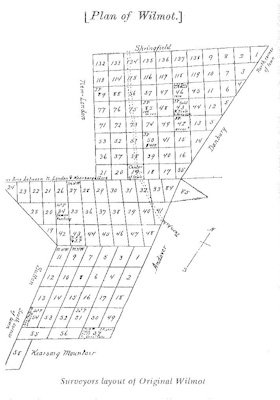 LeVarn describes the difficulties that geography imposed on transportation. In the early 19th century the southern part of New London – Colby, Burpee, Morgan, and Leper hills – was the most thickly settled part of the town. In the north of the town most people lived eastward in what is now called North Wilmot. It was therefore – in the days of horse-drawn wagons and indirect dirt tracks – a hardship for the residents of the northern part of New London to traverse the 12 miles to attend town meeting and to do business with the town through the year.

According to LeVarn, the populations of the southern and northern parts of the town also had different politics. The southern residents tended toward Federalism, which was more sympathetic to a strong central government, while the northern residents were Jeffersonian republicans and supported a weaker central government. They were also divided on the topic of religion, with the southerners being Calvinist Baptists and the northerners being Free-will Baptists and a few Congregationalists. The politics and religious sentiments of the 179 people inhabiting Kearsarge Gore on the northern slope of the mountain more closely aligned with those in the northern part of New London.

The Turnpike and the Railroad

The Fourth New Hampshire Turnpike was built in 1804, three years before Wilmot was incorporated. The turnpikes (something like stiles) and gates were set up by 1806. It was a privately-financed thoroughfare intended to allow commerce to move efficiently between Concord and Hanover. Before the coming of the railroads, turnpikes were often the fastest way to move goods among settlements. Service businesses – taverns, inns, dry-goods stores – were often located next the turnpike to serve a customer base that included travelers. The present New Hampshire Route 4A follows the path of the historical turnpike through Wilmot. The Grafton Turnpike (New Hampshire Route 4) was another important commercial road in the early 19th century; it was opened in 1806.

The turnpikes rarely managed to pay for themselves because there was a great deal of cheating on the tolls, abetted by town governments, which authorized the construction of local roads that went around the toll gates. Without enough toll income to finance maintenance, turnpikes fell into disrepair, the corporations that owned them dissolved and they became public highways, repaired by local and state governments.

In 1848 the Northern Railroad was completed between Concord and White River Junction, Vermont, superseding the roads as the most efficient way to move goods and passengers over longer distances. The early steam trains, according to LeVarn, sped along at 15 to 20 miles per hour. The path of the railroad did not pass through Wilmot, but instead followed the route of the Grafton Turnpike. In 1888 the name of the railroad became the Boston and Maine.

Early industry took the form of mills. The typical pattern in pioneer settlements is that saw mills are constructed first, in order to turn the timber into lumber as the land was cleared for agriculture and animal husbandry. Grist mills are erected next to turn corn and grain into meal flour. Other mills that satisfy local needs follow and finally mills and factories are built that produce goods for export.

Three brooks in Wilmot once supported industry. Henry Tewksbury built one of the first saw mills on Walker (or North) Brook in northeast Wilmot, and he then built a grist mill on the same brook. Walker Brook heads up above Old North Road and flows east into Danbury, where it cuts a well-known ravine and falls and today attracts white-water kayakers. In Home to the Mountain, a history of Wilmot by Thomas S. Curren and Kathy Neustadt and published in 2007 to celebrate the town’s bicentennial, the authors listed 17 mills standing on Kimpton (or Center) Brook between 1840 and 1920. In addition to saw and grist mills, there were several last factories, which manufactured the wooden forms for shoemaking, as well as two furniture makers. Kimpton Brook originates in Butterfield Pond at the western edge of Wilmot and flows southeast across the town and then north into Eagle Pond. After the 1870s there were also several mills along Cascade Brook in Wilmot Flat, including a tannery. There are two branches of this brook, the larger of which begins at Pleasant Lake in New London and flows east into the Blackwater River in Andover. A smaller, branch flows north near Kearsarge Valley Road through many wetlands to a confluence in the flat.

Modern soil surveys show that only scattered areas of Wilmot were suitable for tilling. The largest extends down the Cascade Brook valley through Wilmot Flat, and there are two smaller areas on Cross Hill and in an arc through northern Wilmot near White’s Pond. The rest of the town’s soils are more suitable for grazing livestock and in the early 19th century Wilmot joined the general movement in northern New England to raise sheep for their wool.

In the present day the only trace of the sheep-farming era is the stone fences that run through a landscape now largely covered by mature deciduous forest. As of 2003 (in a study done of the Colby-Sawyer College Institute for Community & Environment), fully 67% of the town was in in the state’s current use program, which provides a significant tax break to landowners who use their property for agriculture, logging, and conservation rather than subdividing it for residences. The study also found that 10 large parcels made up 36.5% of the town’s total area.

Farming continued at a small scale in Wilmot into the 20th century. In 1949 Kay White and Donna Niles, two World War II veterans, founded Freedom Acres, a jam and preserves business that began with local fruits and berries. It closed in 1980. The Nowell Farm in North Wilmot was established in the 1950s and in 2017 was protected by a conservation easement through the Ausbon Sargent Land Preservation Trust. While crop farming is almost unknown in modern Wilmot, many people grow their own vegetables and some sell them at the Wilmot Farmer’s Market each Saturday between June and September.

Today there are three retail businesses in Wilmot and many home-occupation or cottage-industry businesses, and according to the state Employment and Labor Market Information Bureau, 16% of the population works in town. Most work elsewhere, with 82% commuting to somewhere in the state and 2% to another state. The town has two village districts – Wilmot Flat and Wilmot Center – but at present there is no commerce in them. In addition to residences, Wilmot Flat is home to the post office, the town office, and the Wilmot Community Association, and in Wilmot Center you will find the public library and the historic town hall.

We Are Here To Assist You

Board of Selectmen
Cemetery Trustees
Conservation Commission
Planning Board
Zoning Board

Join us for email updates